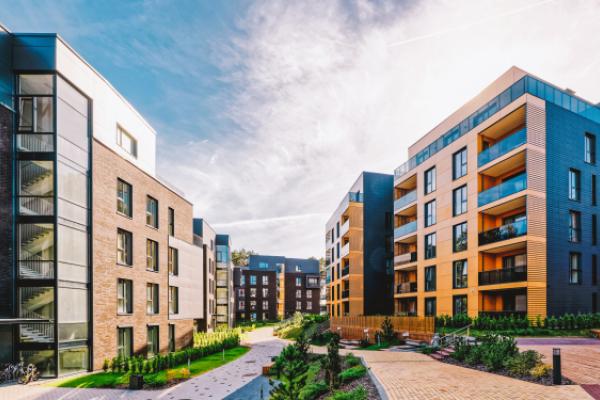 Real estate has a remarkable ability to deliver returns for investors, even when the stock market or other economic indicators are pointing downward.

But resistance to bad economic indicators is not immunity. When the Federal Reserve began increasing interest rates, the previously red-hot single-family home market began showing signs of slowing. Although home prices are still high in relation to historical trends, properties are taking longer to sell and selling for less.

Now, even residential rents in many markets are on the way down. According to data supplied by CoStar Group, which compiles nationwide data on commercial real estate trends, the average asking rent for apartments in America’s 40 biggest housing markets fell by 0.04% from August to September. That means the average national asking rent fell from $1,641 to $1634 for that period.

A 0.04% decrease may not sound like much, but it’s important to note that this was the first time in nearly two years that apartment rents fell in consecutive months. The last time it happened was December 2020, when the country was still firmly in the grip of the COVID crisis. More importantly, there wasn’t a single market in the top 40 markets CoStar studied that saw an increase in average rents during this period.

Although the year-on-year rent average for August was 7% higher than it was a year ago, that’s a significant decline from the 8.4% increase that CoStar recorded in July. Perhaps more importantly than the decline itself is where the decline is taking place.

For the last several years, the American Sun Belt has been one of the strongest real estate markets in the country. The Sun Belt runs from the Southeastern to the Southwestern United States. It includes Texas, Florida, Georgia, Arizona and Nevada. Year-round warm weather has made those states popular vacation destinations. But in recent years, their combination of affordable housing and low state taxes has been a strong lure for both buyers and renters.

That popularity pushed cities like Tampa and Orlando, Florida into the spotlight as some of America’s hottest real estate markets. The same thing holds true for Houston, Dallas and Phoenix. As you might expect, investors and developers followed this trend. They went about the business of aggressively building new inventory in those hot markets. A number of real estate investment trusts (REITs) have assets centered in these markets that are either already online, scheduled to come online or already constructed and in their stabilization stage.

That’s where the CoStar data really begins to paint a vivid picture. Some of the hottest Sun Belt markets are now seeing the biggest declines in rents. This includes

Not only is the national rental market cooling, the markets that used to be the hottest are cooling off the fastest. In fact, the large declines in these markets account for a lot of the biggest declines in asking rents. This of course begs the question of what’s causing the downward trend. After all, the weather is still warm there and the taxes are still low, so why are the rents going down?

A Combination of Factors

There is rarely, if ever, one reason for rental markets across as large a geographical area as the Sun Belt to decline sharply. It’s usually a combination of factors. Supply and demand is one of the first rules that govern economic markets, and when people first started flocking to the Sun Belt en masse, there wasn’t enough supply. That meant owners and developers of existing apartment or single-family housing had a captive audience.

In many cases, there were multiple renters competing for the same properties, and this demand put upward pressure on rents. However, developers responded to that demand by delivering over 100,000 new housing units over the last year. CoStar estimates that over 220,000 units will enter the market before the end of this year. That many units flooding hot markets at basically the same time is bound to have a cooling effect.

Another issue is inflation. It’s no secret that the price of just about everything has gone up. From fuel to staple foods, there is scarcely a consumer product that doesn’t cost more today than it did a year ago. Naturally, when consumers are feeling a pinch like this, they tend to have less confidence in the economy and their ability to make big purchases or big moves.

The souring economy, or at least the storm clouds gathering over it, is keeping people from moving. Even a local move costs a lot of money. There is a security deposit, plus the first month’s rent that will need to be paid. Then the movers have to be paid.

All of that is why consumers are much more likely to ride out their current living situations than make a major move. They’re even less likely to make moves to the Sun Belt if they’re not already living there. When you add all this new inventory to the concerns about inflation, it’s not hard to imagine why vacancy rates are inching upward.

What Does This Mean for Investors?

When rents start dropping, profits for real estate investors do the same. As a response to the increased housing demand in the Sun Belt, numerous REITs made strong moves into the Sun Belt to supply the housing needs of the area. They acquired a lot of assets to renovate and land to build new developments. Naturally, they raised funds through investor contributions to fund these ventures.

REITs, and all real estate partnerships, make money in a few different ways. In the case of multifamily or rental assets, the returns are contingent on the ability to raise rents throughout the life of the investment. These rent increases not only provide passive income for the partners, they also add value to the asset. As investor returns grow during the REIT’s hold period, the assets in the REIT become more valuable.

When rents don’t increase year over year, or even worse decline, the projected returns that REITs offer investors are not realized. Additionally, the assets don’t appreciate in value at the same rate. That means they have a lower sell-on value at the end of the investment hold period.

The high cost of acquiring and renovating or building new real estate assets means the profit margins are incredibly thin. In most cases, multifamily assets can’t generate returns for owners if the occupancy rate falls below 96% for the year. It’s a very fine balance. You want enough vacancies to give you the chance to raise rents, but not so many vacancies that you end up with a glut of them and have to start discounting rents.

When markets where multiple REITs are operating — like Tampa, Orlando, Phoenix, Las Vegas and Dallas — at the same time see rents decline by even 1%, it represents a direct threat to projected investor returns. It doesn’t necessarily mean that investors are going to lose money (assuming the market doesn’t continue to fall), but it does mean that a lot of REIT assets in the Sun Belt might miss their projected return targets.

If you’re looking at REITs to invest in, it would behoove you to really drill down on where the assets are. One of the greatest advantages of REITs is that they hedge against the risk of loss for investors by spreading their assets over a wide geographic area.

If you were looking at a residential REIT with assets in some of the markets that are currently in decline, there is a chance your investment may miss some of its targets. That means your projected 20% internal rate of return may end up only being 17% for a few years of the hold period.

Focus on Other Sectors

If you’re looking at this data, it may or may not be enough to sour you on the prospect of residential REIT investments. That’s a decision you’ll have to make based on your investment goals. On the other side of the equation, when REITs have assets that don’t hit their targets, that may create opportunities for your chosen REIT to pick up some value-priced assets at some point in the near future.

Another thing you can do is remember that multifamily is not the only segment of the REIT investment sector. There are also REITs that concentrate on medical buildings or industrial properties. The same thing holds true for individual investment offerings. Although multifamily gets the lion’s share of the attention from investors, the real estate market at large still offers other opportunities to take advantage of.

Whatever you decide, the tea leaves are showing that riding multifamily investments to predictable returns and steady appreciation is about to get a bit more complicated. It doesn’t mean that multifamily investing is dead either. Remember, real estate is supposed to be a long-term play. In the span of a five- or 10-year investment cycle, you might have some bad quarters or even bad years.

But the history of real estate has shown time and again that it’s a reliable market that wins for investors more than it loses. The real estate market will almost always be in a state of heating up or cooling off. Down markets have proven to be some of the best times to acquire assets.

Regardless of the latest economic data, your job as an investor doesn’t change. You have to weigh the risks, consider your investment goals and make the best decision you can at the time.

No sales pitch required – The Joy of Business