Dollar General (NYSE:DG – Get Rating) is set to issue its quarterly earnings data before the market opens on Thursday, May 26th. Analysts expect the company to announce earnings of $2.33 per share for the quarter. Investors interested in registering for the company’s conference call can do so using this link.

Dollar General (NYSE:DG – Get Rating) last announced its earnings results on Thursday, March 17th. The company reported $2.57 earnings per share (EPS) for the quarter, beating analysts’ consensus estimates of $2.56 by $0.01. Dollar General had a return on equity of 38.64% and a net margin of 7.01%. The company had revenue of $8.65 billion for the quarter, compared to analyst estimates of $8.71 billion. During the same period in the prior year, the company posted $2.62 EPS. Dollar General’s quarterly revenue was up 2.8% on a year-over-year basis. On average, analysts expect Dollar General to post $11 EPS for the current fiscal year and $13 EPS for the next fiscal year.

In other news, EVP Emily C. Taylor sold 10,016 shares of the stock in a transaction on Thursday, March 24th. The stock was sold at an average price of $220.20, for a total value of $2,205,523.20. The transaction was disclosed in a legal filing with the Securities & Exchange Commission, which is available at this hyperlink. Also, CAO Anita C. Elliott sold 7,502 shares of Dollar General stock in a transaction dated Wednesday, April 6th. The shares were sold at an average price of $235.70, for a total transaction of $1,768,221.40. Following the sale, the chief accounting officer now owns 16,279 shares in the company, valued at $3,836,960.30. The disclosure for this sale can be found here. Company insiders own 0.60% of the company’s stock. 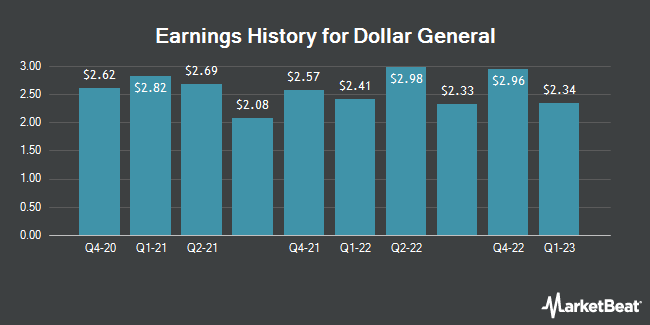